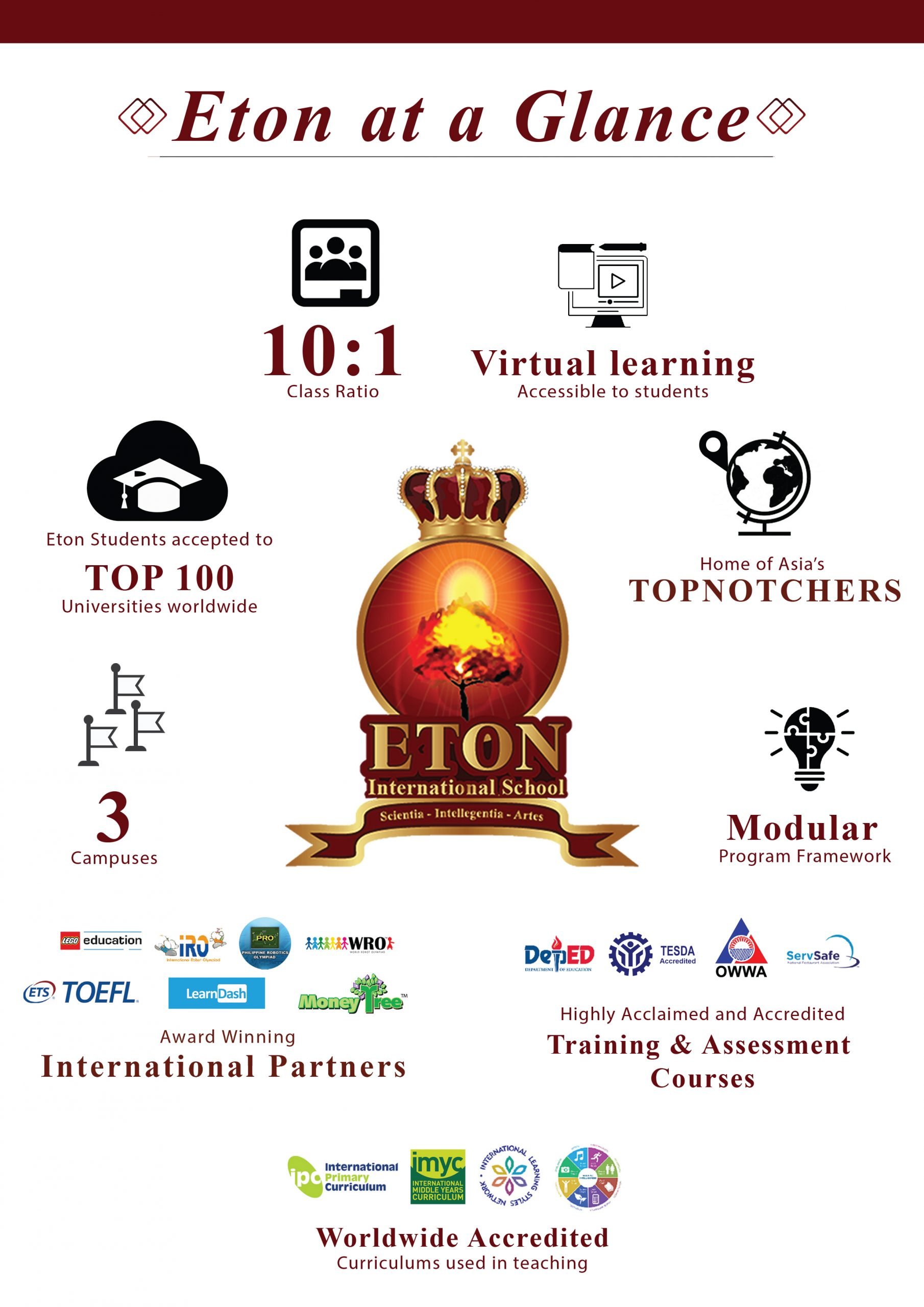 We are an Ecumenical international school where everyone can learn from the best and brightest in the world anytime and anywhere in Science, Business Technology and the Arts, offering universal access to global education to help them serve their family and country better as innovators, entrepreneurs and leaders all for God’s glory.

We serve God by building people, families and communities. We make international education open to all by developing 21st century environment with innovative, creative and specialized programs with our local and international partners to empower students, scholars and professionals succeed here and abroad.
​

Molding children to become the leaders of the next generation is always and has been the mission of Eton International School Founder and President Jacqueline Marzan-Tolentino. She wanted to build a school without borders where the best and brightest in their country can learn, while celebrating their differences and honoring their uniqueness without limitations. She wanted to nurture global leaders using the 21st century teaching approaches that she learned when she studied several programs that focused on brain development and learning at Harvard Graduate School of Education and Bank Street College. She dedicated her life in empowering kids by studying different teaching and learning styles in the US, UK, and Asia.

In 2004, Eton International School was born and was first known as “Eton School” located inside a mall. It provided top quality Preschool education with Mandarin and Nihongo to families living nearby Robinson’s Manila in condominiums and business establishments. Initially, it started as a playschool, adjunct only to the founder’s Computer Institute to provide additional service to its existing corporate clientele. It offered an alternative to traditional education by teaching global educational programs like Multiple Intelligence from her mentors Dr. Howard Gardner of Harvard and Learning Styles from Dr. Rita Dunn of St. John University, USA.

In 2005, the school was granted a permit from the Department of Education to operate as an international school that provided for the long-term needs of the children of expatriates and local families in Manila. It finally became known as “Eton International School”, a non-stock, nonprofit entity that distinguished itself from other traditional schools by offering the latest scientific, business and technological education programs in the country that gave their students competitive edge locally and internationally. By 2006, it was one of the biggest mall based international preschools in Manila, made popular by its global academic programs, serving 75 families catering to multiple nationalities.

By 2007, the school inaugurated its first campus in the heart of Manila, the capital of the Philippines, and decided to open its Grade School level serving its pioneer 100 students. Eton International School used two-year advanced academic programs than local schools and opened with 17 learning centers offering four levels of preschool from nursery to preparatory until grade three. They also launched their first International School Exchange program in Singapore for the growth of their teachers and students. Lastly, the founder chose Manila because no international school was serving the area.
Eton has always been the forefront of innovation in Education. In 2008, the school became the first international school that produced 10 International Topnotchers in English, Math and Science. Eton Grade 1 students topped the International Benchmark Test (IBT) for Grade 3 Math, Science and English held by the Center of Education Management Inc. (CEM). It was the first time that Filipinos became no. 1 in Math beating Singapore, Australia and USA. The school received a commendation from Department of Education (DepEd) for this momentous feat.

By 2009, Eton became an accredited International Learning Styles School in the Philippines and the founder was bestowed the privileged of becoming an International Board member of the prestigious International Network of Learning Styles under the tutelage of Dr. Rita Dunn and Susan Rundle. This year became pivotal as the school became known as the home of Asia’s top-notcher in Math, Science and English as it repeated the same feat.

In 2012, Eton International School finally decided to open its doors to middle school students. It also became the first 3D School in the Philippines where children can learn Math and Science in an exciting way. It also opened its second campus in Quezon City with 25 students. By 2013, Eton prepared for the K to 12 Program in preparation for the Asean Integration in 2015. The school became part of a bigger International network of Fieldwork and adopted their International Primary Curriculum and International Middle Year Curriculum used in 150 countries and 1000 schools worldwide. It hosted the launching of IPC and IMYC of United Kingdom in the Philippines. They also piloted the one-tablet-one-child program for preschool to middle school using Wiz learn technologies from Singapore. More so, the school also won the overall champion in Aeronautics Competition in Shanghai, China.

In 2014, Eton started to offer the full middle school and junior high school program by adding the new three-storey school building with its own gymnasium. In 2015, the first batch of high school graduates broke local and international records in the field of Science scoring 99+ Math 99+ and English 99+. It also produced students who became topnotchers in their chosen field like Physics, Medicine and Technology. The gradeschool students also honed their skills in Robotics to represent the country in international competitions and lastly it celebrated the win of their gradeschool student who garnered the top artist who got five (5) division championships in the world championship in performing arts in USA.

Eton came from being a “School without Borders” to “The School of the Future” and now a certified “International School of Science, Business Technology and Arts.” The school is preparing to play a big part in the Asean integration by preparing its students to be 21st century learners who are innovators, entrepreneurs and global leaders.